Pussy Riot: setting them free in song | Music | The Guardian

It would be disappointing for a vocal work based on the trial of a dissident punk group to be anything other than a little profane. The Norwegian composer Cecilie Ore describes her choral commission for the BBC Singers as "an homage to the brave members of Pussy Riot". Rehearsals for the piece on Tuesday find the choir in discussion over the correct pronunciation of the word "fuck".

"There's a bit of a problem with clashing dialects," observes conductor Nicholas Kok. "I think we need to agree on whether it should be a northern fuck or a southern one."

The 24-minute piece, Come to the Edge!, has been commissioned by Radio 3 and the Huddersfield Contemporary Music Festival, where it receives its premiere this weekend. This unique political cantata interleaves statements made by the three convicted members of Pussy Riot with famous declarations on the subject of free speech from sources including George Washington, Shakespeare and comedian Lenny Bruce, whose observation "Take away the right to say 'fuck' and you take away the right to say 'Fuck the government'" is giving the BBC Singers so much trouble.

One of Norway's most respected composers, Ore is a thoughtful, quietly spoken figure in her late 50s; though she becomes passionate when describing the political conviction behind her work. This includes Dead Beat Escapement, which was compiled from testimonies of American prisoners on death row and was one of the first contemporary operas to be staged at Oslo's new national opera house; and a video installation entitled A – a shadow opera, also receiving its UK premiere at Huddersfield, which presents a condemnation of human conflict from the siege of Troy to the occupation of Afghanistan.

Come to the Edge! was written in response to the sight of three articulate, unrepentant but clearly frightened young women undergoing the contemporary equivalent of a Soviet-era show trial. One of the Pussy Riot three, Yekaterina Samutsevich, was released on appeal in October last year; Ore says she genuinely expected that the remaining pair, Maria Alyokhina and Nadezhda Tolokonnikova (whose sentences are due to run until March), might have been freed by the time her choral tribute was performed. Instead, the situation has deteriorated: rehearsals for the piece began on the day the Russian authorities finally produced confirmation that Tolokonnikova had been admitted to the medical wing of a Siberian penal colony, following a three-week transit period during which her family and legal representatives were denied any information of her whereabouts.

"To my mind, there is absolutely no question that she is being punished further for having the courage to speak out about the abuses of the Russian prison system," Ore says. (In September, the Guardian published an open letter in which Tolokonnikova announced she would be going on hunger strike in protest at female prisoners being forced to sew police uniforms for 16 hours a day for a monthly salary of 57p.) "The bravery, articulacy and intelligence of these women continues to astonish me," Ore says. "Their action has become far more than a prank in a cathedral. They are among the most significant proponents of freedom of speech in our time."

Although Ore's piece incorporates Pussy Riot's words, it does not attempt to assimilate their style. "I'm not sure that the BBC Singers would be happy to subject their voices to all that screaming," she says. "But I thought the punk prayer protest was brilliant. It was loud, offensive and hilarious. But I think the band's message was more important than their music."

Ore's own compositions make use of an unusual palette of sounds. A – a shadow opera is accompanied only by intense, metallic percussion; while her capital punishment drama replaced conventional instrumentation with sounds of death row prisoners eating, breathing and sleeping. Yet the most surprising aspect of the Pussy Riot cantata is how accessible and light on the ear it seems. There are no gongs or grunting; rather the quotations are combined into a harmonious texture whose counterpoint is at times reminiscent of a Bach chorale.

"It is very important to make a feature of the words," Ore says. "If the mood is grey, ugly or dissonant all the time, people do not listen. This is not an opportunity for me to prove what a clever composer I am. It is my job to make the meaning as clear as possible."

There might also seem to be a danger that comparing the words of Pussy Riot with some of the world's most profound philosophers and thinkers could diminish their impact. Yet Ore has created settings for Tolokonnikova, Alyokhina and Samutsevich that fly free from the hubbub of voices with the same steely resolution as the statements delivered to a Russian courtroom. Ore concludes the piece in the same way Tolokonnikova finished her defence, by quoting from a Pussy Riot song: "Open all the doors, tear off your epaulets. Come, taste freedom with us."

"I was so moved by the conviction of the girls' final statements," she says. "Their words carry a profundity and eloquence that deserves to be heard alongside George Washington or Shakespeare or St Catherine of Siena." But perhaps the most apposite quote Ore draws on is that of the singer and activist Harry Belafonte: "You can cage the singer but not the song."

"The best tribute I could pay to Pussy Riot is to show that they are not alone," Ore says. "I hope at least that my piece places them in good company." 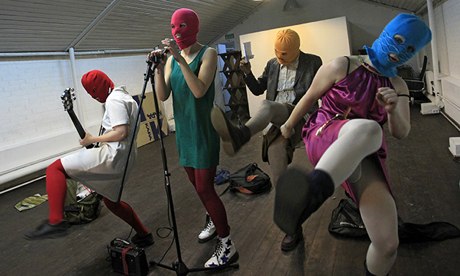